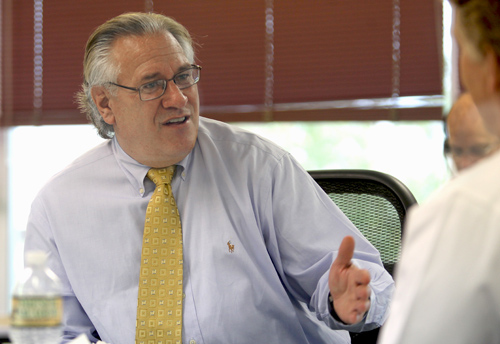 Frederick A. Rossetti is a co-founder and Managing Director of TrueNorth Capital Partners LLC. In his role, Fred is involved in mergers and acquisitions, corporate advisory assignments and corporate restructurings, both domestic and internationally. Fred has worked as lead investment banker and financial advisor on private transactions within the manufacturing, service and wholesale distribution industries. Fred has also been lead banker in a number of tender offers and going private transactions. In addition, he has served as court approved investment banker on bankruptcy cases and advised clients on the acquisition of assets being sold under the protection of bankruptcy or state receivership.

Prior to co-founding TrueNorth, Fred co-founded Knox & Co., a boutique middle market investment banking firm. Knox & Co. was focused on cross-border advisory business for global multinationals in Japan, China and elsewhere in Asia and had a strategic alliance partnership with Bank of Tokyo – Mitsubishi UFJ Ltd. While at Knox, the firm developed a reputation as the preeminent middle market cross border firm completing transactions in Asia, Australia, Europe, North, South and Central America. In addition to his responsibilities at Knox, Fred was President and Chief Operating Officer of Knox’s affiliate Knox Enterprises, Inc. which managed the firms Principal Investments.

After graduating from Boston College, Fred began his career at Price Waterhouse LLP (now PwC). After four years he accepted an offer to become Chief Financial Officer of one of PwC’s clients. After three years in that capacity he moved on to begin his career in investment banking where he has since remained.

Fred holds Series 7, 24, 63, 79 and 99 securities licenses. He previously served on numerous Boards of Knox & Co. related companies and affiliates both in the US and abroad. Fred is a member of the Association for Corporate Growth, the Turnaround Management Association and the American Institute of Certified Public Accountants.